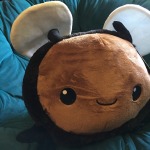 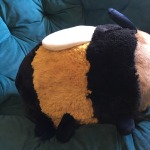 This solstice has brought me a very very large friend.

He is wonderful. Thank you to the sender. I’m very pleased. My large scale “Papoose Simon” can ride him like a horse…

Until the Spawn see him. And then he will be the favorite friend of the group.

Sugar and acids. I discuss it somewhat in my book, but since you seem so keen, please allow me to regale you with the history of…dentistry.

The three dangers to teeth are as follows: wear, rot, improper growth/injury.

Rot is the principle one in modern times and in many ways, this is because of diet. Firstly in times bygone, sugar was difficult to come by and therefore expensive, which meant most people didn’t eat it. If they sweetened things it was with fruits or honey…which as we know is highly antipathogenic. Fruits and veg were largely what was gathered and there was no high end farming to produce things year round, so one ate seasonally, and things high in acid were spread far thinner.

Believe it or not, humans have been caring for their teeth since as long as there have been people. In my own lifetime, men have all cared for their teeth by scrubbing them with linen dipped in pastes made from ashes mixed with things like clove, rosemary, witch hazel. Early toothpastes, these provided charcoal and numbing, as well as antiseptic properties. People even made and sold mouthwashes made from all manner of things…even refined urine. These also helped stave off infections. They would perform tooth masques, similar to the charcoal varieties done today to whiten (though to be honest, many of these had toxic elements). Briefly, during Elizabeth’s later reign, blackened teeth went vogue for a time, because she ate cane sugar sweets (owing to the newly formed transatlantic trade routes) and her teeth began to rot out of her head. Women would smear their teeth with pastes, wax mixed with ashes, even dye their teeth and the whole insides of their mouth, but again…that was only for a brief time. White, polished teeth were still the prevalent fashion.

Because of the lack in antibiotics, any serious wound or potential “infection” (though we didn’t know that word) was treated with severe caution. Teeth that demonstrated abscess, were pulled. If a tooth became damaged to the point of misery, out it came. Painful to the point of distraction? Out.

The only true danger to teeth and to health was wear. We ate grains ground only with stones and that grit was very hard on human teeth. It wore them smooth, but remember…plaque seeks out roughened dentine. The smoothness of the teeth actually staved off infection and rot also, until the tooth pulp was exposed, at which point the tooth came out. At that point, however, the teeth had worn through most of a man’s lifespan. Toothlessness was more of a problem than it is now, but only because we hadn’t quite figured out dentures. We tried. Washington famously had his wooden teeth, but other sets were made with human teeth.

No, humans have always cared for their teeth, and if you look at medieval skeletons pulled from the plague bits I dug, you’ll see that. Their teeth, even hundreds of years later are in excellent condition.