This is a post which was deleted from Creature’s Cookbook 2: Monster’s Mise En Place. In chronological order, it should be first. Merely one of the many things that had to be trimmed to reign me in to a sensible word count.

“Which one of you did this?”

They exchange a look. I cannot tell which one of them is more contrite. I would say the larger of the two, but his tail is capable of sagging, and that does skew the perception somewhat. The other hangs his shaggy head and fans his gaze over my feet, up my legs, a battering at my face, but then fluttering to the concrete.

I narrow my eyes.

“Which one of you is responsible?”

Tongues appear. Then both back away from me in a sense of certain destruction as I tap my toe dusted in one-of-a-kind 19th century porcelain. Tiny, hand-painted Romanesque figures are stopped in their last dance around the maypole, ribbons fluttering in the dead breeze. The carefully procured set still in its box was the product of several decades of searching; worth a down payment on a house, or a brand new car, it lies in porous little shards.

Both of them cower. Back to the bar I chase them, until the dog hides in the kitchen and the monster climbs the barstools. His coloring book is open and his half-chewed crayons are scattered. In the poorly shaded image, I see the truth — young girls dancing in a circle, holding hands, their hair done up in ribbons. Several weeks ago I caught him looking in that box; and now he has done it again to disastrous effect. Just so that he could color it properly.

I count. When this fails, I divide. Giving up that for rage, I proceed immediately to factoring a polynomial. My x’s and y’s in a row, I lick my fangs and take deep breaths. Insurance. There was insurance on it. I can make a claim. I can photograph it. I can contact the adjustor immediately and make a claim. As I do this, the two assailants chew — the larger at his paws, the smaller at his crayons.

The evidence is emailed, and the adjustor contacted. I squat beside the pieces and shift them with my claws. Such a gorgeous set of six cups and saucers, pot, sugar dish, and creamer. Every tiny hair and feature captured with the precision of a laser, and here it lies, having gone the way of all flesh.

Some poor soul, sat at this thing with a brush in his hand. He wetted it with his own tongue, he peered into a magnifying glass. Some day, perhaps, he went blind from the staring by gas lamp. Perhaps this set, the trifle of some corseted trophy wife, sat on display in a drawing room. They survived wars, transatlantic voyages, fires! My kinsman, shattered on the floor.

“It can’t be fixed, Fred. You can’t glue this back together and make it whole. It was beautiful because it had survived for so long. It doesn’t mean anything anymore.”

He drops from the stool like a Chimpanzee and saunters cautiously to me. With that grace that is ours alone, he plucks pieces up and begins to arrange them on the ground, carefully setting the curved bits and flattened fragments of plate into lines. Occasionally, he lifts several bits and looks them over, then they are replaced in different order. Disconsolate, I watch his work, willing to allow him whatever liberties he likes, now that the beauty has been slain; it might as well be devoured. A living tableau of Death and the Maiden.

As the pastel shapes are spread out, like an unfolding map, I see it. A puzzle — it comes to life, and for a moment, I am stunned out of my grief.

The maypole has multiplied. Three stand in a row, and girls composed of disjointed shards dance in a swirling line around all of them. They do not match perfectly, but the image is clear.

He points at it, and nudges me with a grinning face. “Fix!”

With a sigh, I go to the back and fish out a piece of thin wood. It was to be used as a secondary tool shed, but this is a worthwhile cause, I think. Fetching some goops and glues, I sit beside him on the ground, and we two immortals, with our teeth and our claws, turn this broken pottery — the stuff of civilization — into a pretty mosaic. Grouted and frankly lovely, it sits on the metal table in my shop and dries.

A priceless relic that is utterly worthless.

And Fred climbs back onto his stool and colors his pretty little picture.

What are we, I wonder? Are we destructive in our hearts, or constructive in our thoughts? Do we create, or do we annihilate? Or is there a difference. Dancing round that maypole, praying for spring, dreading winter, but preparing for it. Running from shadows to light torches to beat them back. What are we?

When it has cured, I hang it on the wall in my bedroom, and stare at it. Chef  straddles my hips, dangling his legs on either side of mine, his chin on my shoulder and his face pointed at our dread collage.

“It’s pretty. The colors go really well with the room.”

“I could have re-outfitted the entire Bistro.”

“Yes, but not at value. And that is not the point.”

“I know. You don’t like seeing things come apart. But you know, clay comes from somewhere. I don’t see you out crying over rocks eroding, or coal mines. Don’t see you out there sighing at the fucking coastline.”

And he is right. I care very little for the earth. I know why this is, in the secret heart of me. I know that I do not care for it because it is all circumstance. It is a pile of pieces that crashed into the ground and stuck, no order, no cleverness. As lovely and remarkable as the accident of organization, through evolution and trial and error, nothing is as gorgeous as that which comes from purpose and intent. Nothing is more stunning than a mind which turns something formless into something so dainty, molds mud into perfection.

“I can’t believe he saw that,” Chef whispers as he pulls his shirt over his head. “I saw that stupid thing a dozen times, and I never noticed that the figures overlapped like that.”

He points. “See? She was half there, and half on the cup. And that girl is half saucer, half pot. It’s like the image was a whole one that got cut and sculpted into the set.”

He flops backward and wraps his feet up around me. I set my hands atop them, and tap the soles.

And now I see this broken thing anew. Once it sat in parlors and watered the well-heeled. now it unfolds its mysteries and shows me what civility looks like when it is unbent by monstrous hands.

“I think…I will call it ‘Teatime’,” I say with cocked head. “I wonder if there’s a market for Monster Art.”

“Have you seen the Chihuly museum? Looks like a Dr. Seuss book. I half expect Who’s to wander out from them. How much do the sell for — those ceiling ones that look like he threw all his practice pieces up in the air and backlit them?”

I grimace back at him as he rolls up in the bed like a burrito folding itself. The light from my brilliant red chandelier casts a rosy glow. I shake my head as I listen to him snore.

Tomorrow, if Fred returns, I will have him sign his piece. He knows his letters well enough now. 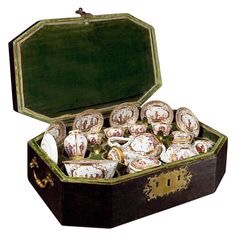 You may find Creature’s Cookbook 2: Monster’s Mise En Place on the Tapas app.